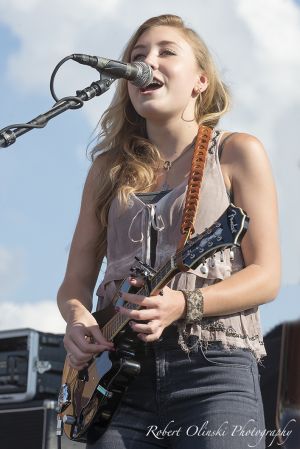 What could two fifteen year olds girls growing up in Sugarland Texas and Ada Oaklahoma have in common. Fortunately for Maddie Marlow and Tae Dye it was a vocal coach who brought them together during a talent showcase in Northern Texas. That meeting led to writing trips to Nashville and eventually they were introduced to Mike Molinar the Vice President of Big Machine Music and writer Aaron Scherz. It also led to the formation of “Maddie and Tae”. Although they lived seven hours away from each other they continued to visit each other and write. Their trips to Nashville also increased and they continued to rehearse and record with Molinar and Big Machine Label Group’s SVP/A&R, Allison Jones. On a trip in February 2013 Jones gave the duo the following advice “If you really want to pursue this, you will need to move to Nashville”. In order to move to Nashville Tae had to graduate early from high school and Maddie had to turn down college. “Girl in a Country Song,” became their first single and was produced by Dann Huff. The tune made BMLG CEO, Scott Borchetta, and newly appointed GM of Dot Records, Chris Stacey sign them to a record deal.

Watching the duo perform during the Royal Oak Arts, Beats and Eats, you can not help but like the two young ladies. I was struck by how much they seemed to love what they were doing.  It was interesting to watch them talk between songs and see them both step in and tell  a story, they genually seemed to like each other.  You would almost think they were sisters.  Here are several images from the event.

This entry was posted in Uncategorized.